Getsiz.ru analyzed the purchase budgets for workwear, safety footwear, and PPE of 25 top Russian industrial companies for 2019. We received the data both directly from the companies at our request and from open sources, PPE suppliers and manufacturers, and from experts in the PPE market.

The collected information allows us to draw a number of conclusions which we want to share with the Getsiz.ru readers.

We would like to use this analytical report to answer a number of questions:

Data on operational costs were provided by Rosstat (Russian Statistic Agency) and the numbers of employees were obtained from open sources. 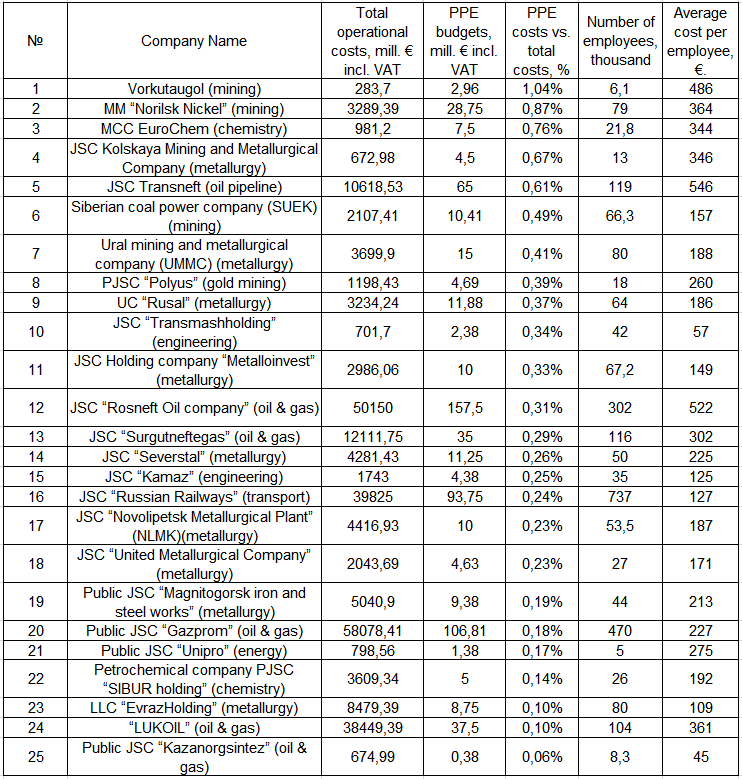 Analyzing the data on the PPE costs per person in large Russian industrial companies, we can see that the figures differ greatly from industry to industry and from company to company. 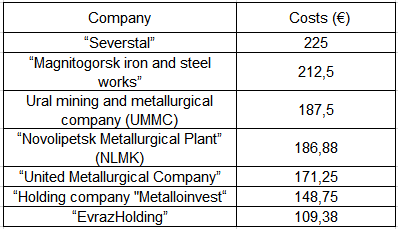 The ferrous metallurgy industry in Russia employs more than 600 thousand people. The average PPE cost per one employee, according to Getsiz.ru calculations, is 175 €. But this amount can vary from 109.4 to 225 €. For the leading enterprises (Severstal, MMK, NLMK) these figures are slightly higher than the industry average and are very close to each other.

UGMK Holding includes not only iron and steel companies, but also mining enterprises. PAO Severstal, Evrazholding, NLMK, MMK, Metalloinvest and OAO Mechel account for 93% of all iron and steel industry products in Russia.

In the non-ferrous metal industry, the PPE cost per person is on average 287.5 €, which is more than 50% higher than in ferrous metallurgy. According to Getsiz.ru, this difference is due to two reasons. The first one is adverse factors in workplaces of the non-ferrous metal industry: harmful aerosols formed in the process of grinding ore, metal vapors (such as copper, nickel, lead and arsenic), and presence of harmful gases (sulfur dioxide). These conditions require a wider range of PPE compared to iron and steel industry. The second factor is cold climate conditions. Leaders in the production of non-ferrous metals — MMC Norilsk Nickel and Kola MMC — operate in the far north regions which require the use of workwear protecting from extreme cold weather conditions.

PAO Transneft and PAO Rosneft are leaders in the oil and gas sector in terms of providing their personnel with PPE. These companies have strict corporate standards, which stipulate high requirements for workwear, safety footwear and PPE.

PAO Transneft and PAO Rosneft use workwear made of fire-retardant aramid fabrics, like all leading world oil and gas companies. It is difficult to compare the level of costs per employee in Russian and foreign companies, due to difference in legislation, production technologies and accounting methods.

According to Getsiz.ru, the PPE costs per person in Russian oil and gas companies are comparable to those of foreign companies.

The sampling in the analysis for machine building and power engineering does not allow Getsiz.ru to draw accurate conclusions on the costs of PPE per employee.

Obtaining data from open sources allowed Getsiz.ru to see that in the power engineering sector in Germany in 2018 the PPE costs per employee were 520 €.

According to the Federal Insurance Fund, the PPE costs per one worker in Russia amounted to 94.4 € excluding VAT in 2016.

In 2019 according to Getsiz.ru and the PPE Association, the PPE market in Russia reached € 2 billion excluding VAT.

On average, at large Russian companies the PPE budgets only made up 0.25% of the total operational costs.

In industries with greater risks this figure was higher:

Based on these figures, we can conclude that the PPE budget is not a significant expense item, even though the provision of PPE is an important issue in the social policy of the company. The PPE costs are included in the overall budget for occupational and industrial safety, which can reach up to 1-1.5% of the total operational costs.

The current crisis will force businesses to cut costs. PPE budgets are often a subject for cuts. The analysis carried out by Getsiz.ru shows that the PPE budget is not a significant item of expenditure of a company.

Is it really worth saving on “purchase of PPE”, which amounts to less than 1% of the total costs?

In my opinion cutting the PPE costs is the last thing to resort to. It can be done only when all other cost items have been reduced. High-quality PPE not only protects the health and life of the workers, but also affects the labor productivity.

Getsiz.ru publishes a lot of stuff on this issue. An uncomfortable helmet or safety eyewear would lead to more breaks or even make a worker drop using them entirely, which would increase the risk of injury.

The role of PPE in the social policy of a company is often underestimated. People quickly get used to good things and changeover in a time of crisis to low-end workwear, safety footwear, and PPE will have a negative effect on the working climate.

Occupational safety and procurement departments should think thoroughly about the risks of cutting the PPE budget and answer the question: «Why should the expense item that amounts only to 0.25% of total operational costs be reduced even more?»

Right now, the share of PPE budgets in the total costs of companies is simply ridiculous. And in comparison, to the value of the employees’ health it is completely absurd.

During a downturn, most companies take actions to reduce their costs. This is a generally accepted fact. There are many PPE manufacturers on the market now, and if you set a goal to find cheaper PPE, then you will most likely achieve it.

If you prioritize lowering PPE purchasing price, then you will eventually find that lower price and be able to reduce the costs associated with PPE supply for your employees. Seems like a good plan? Not really.

In most cases, your costs will initially decrease due to the lower price, but then increase several times over the next months. A year after the decision to replace PPE with cheaper alternatives, you will most likely see that every ruble saved on switching to cheaper PPE turns into at least 3-4 rubles of new additional costs. That is, if the short-term economic effect of such a decision looks positive, then the medium-term effect (6-12 months) is likely to be negative. The challenge for HSE managers is to convey this logic to company executives who make the final decisions about PPE to be used at their company. Several PPE-related factors have a large impact on key long-term performance indicators of a company, such as employee satisfaction, employee turnover, etc. These indicators are not easy to measure and relate to the PPE used, even though this can still be done. It is easier to try to assess how cheaper PPEs may affect three categories of costs: occupational injuries, worker productivity, and frequency of PPE replacement.

Reducing protection level from occupational hazards when switching to cheaper PPE is the first and main factor that needs to be paid attention to. How effective are the alternative, cheaper materials and PPEs in reducing the hazard risks present in your workplace? If you are not sure that the cheaper alternative protects can do so at least as well as the PPE you are currently using, this can be a reason to think again about your decision. What is the current injury rate at your company? As a result, what are the real costs associated with lost time and medical treatment of workers? All of your savings in PPE cost can be ruined by just one additional accident due to the choice of wrong PPE.

The productivity of workers using PPE along with comfort and ergonomics is another category associated with the medium-term economic impact. You replaced your employees’ thin protective gloves with thicker (and cheaper!) ones, and their productivity while working with small details dropped. Or your employees began to take off their gloves more often during a production operation — and your injuries increased. You have replaced your protective clothing with cheaper but also heavier and more cumbersome clothing. Even if the protective properties of such clothing have not changed, workers now need more time to rest — and their productivity has dropped. The decline in productivity is easiest to assess in plants with measurable worker output per shift.

The last factor to look at is the lifespan of the PPE. If you buy PPE which is 30% cheaper, but also requires replacement twice as often, then you do not save, but on the contrary, spend more. The problem is often that the circulation of some PPE in factories (e.g. protective gloves) is poorly controlled, if at all. Very often, the reduced service life of cheaper products is not compensated by a lower price, but the company does not even know about it.

In my experience, the purchasing price of most PPE accounts for a disproportionately smaller share of a company’s finances than the economic benefits of reducing injury risk and increasing employee productivity.

If a company is looking for cost reduction opportunities, then reducing worker injury may be one of them. In some cases, it may be beneficial for companies not to cut their PPE budgets during a crisis, but instead, based on risk assessment and control systems, invest in better and more expensive PPE.

The problem, however, is that you will not see all these effects from using better PPE immediately — only after at least 6-12 months. This is why there is such difficulty for the company leaders in deciding whether to fund such PPE procurement programs. When deciding on the economic feasibility and reducing procurement budgets for PPE, consider the possible risks of additional costs due to increased injuries, reduced worker productivity, and reduced product life. Saving on PPE can easily translate into additional costs, and investing in the best PPE can be an economic benefit!

Eight factors that will affect Russian PPE market in 2020-2023

What will influence the Russian PPE market within three next years? The economic situation in Russia. 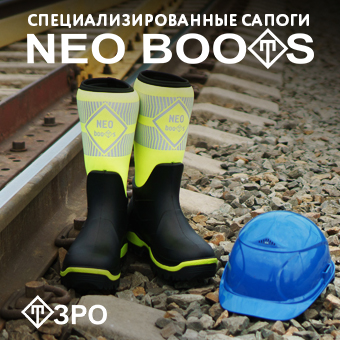